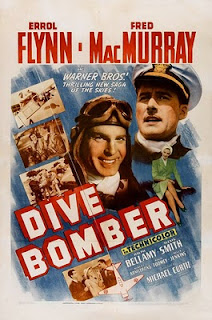 Fred MacMurray and Errol Flynn have strong chemistry together in director Michael Curtiz’ big budget aviation film. I’ve never been a big Flynn fan, but this film helped my opinion of him — he’s certainly more believable here than in a film such as Objective, Burma!, where we are supposed to buy him as a hardened infantry commander. Freddie Mac is as reliable as ever, and Bellamy is fine in a serious role. It's actually nice to see him cast as something other than the boob in a romantic comedy for once.

It may not be accurate to call this a WWII film as it was produced and released during the buildup of 1941, but looking back it functions as one. The film is formulaic in its approach: MacMurray plays a salty flight commander to Flynn's pretty boy M.D. When MacMurray's best friend is killed in a crash, he blames Flynn for the man's operating table death. Flynn keeps his cool and turns his guilt into resolve to do something about the high-altitude blackouts that are really to blame. He transfers into the flight surgeon's unit and draws Freddie Mac as his flying instructor. Of course MacMurray and his pals give Flynn a miserable time, but he eventually wins them over through the progress he's able to make alongside fellow doctor Ralph Bellamy.

Dive Bomber is entertaining, but overlong at two + hours by at least 30 minutes. There are some incongruous and unnecessary comedy bits and even an out-of-place romantic angle with Alexis Smith. What this does have going for it are some spectacular aviation scenes filmed in technicolor. The movie scored Oscar nominations in visual effects and cinematography, both of which were well deserved. Dive Bomber is clearly a cut above other early-war flight films, if not in story then clearly in cinematography. There are numerous scenes are formation flying that are impressively stirring.