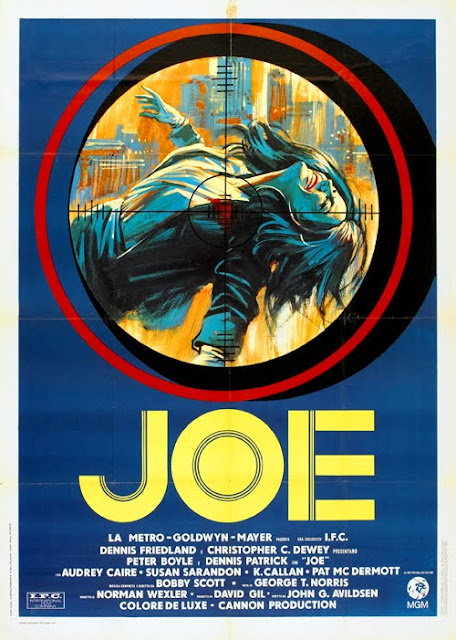 Here’s a film that careens wildly from one theme to the next, and can’t seem to make up its mind exactly what it wants to be, or to whom. Joe is about young junkies in love, the estrangement between generations in the late sixties, the tension between blue- and white-collar workers, the alienation of an unhappy urban existence, and the perils of vigilantism. Each theme is worth its own movie, yet Joe tries to deliver on all of them.

The story revolves around the relationship between a wealthy Manhattan father (Dennis Patrick) who accidentally murders his junky daughter’s (Susan Sarandon, in her film debut.) drug-pushing boyfriend and the man to whom he accidentally admits his crime. In the wake of the murder, adman Bill Compton wanders into a bar where he finds Joe Curran (Peter Boyle) at the next stool. Joe is one of those working-stiffs who thinks the world owes him a little something extra for his forty hours a week, and hippies, liberals and minorities are taking the country to hell in a hand basket. He pines for the good old days and rails blindly against everything from his own kids to those on welfare. Conventional wisdom suggests that Joe will devolve into a simple blackmail story (and maybe if this had been made in the eighties it would have), but it turns out that Joe thinks Bill has done the world a favor, and the two strike up an uneasy, and somewhat one-sided friendship.

As the title suggests, the movie is far more concerned with developing Peter Boyle’s character than Dennis Patrick’s. Although throughout the years many movies have explored the consequences of an accidental killing, this should have devoted more time to Patrick’s tight-laced executive. He proves the more interesting character of the two, and by far the less rooted in cliché: after all, Joe is a racist, right wing, gun collecting nut job — a citified redneck of the first order. He rants, raves, and boozes it up; and like every other working man in the movies he goes bowling each week. Although we don’t see him smack his wife around, he’s short as hell with her — and Boyle plays Joe as a ticking time bomb, which of course he turns out to be. Boyle was a gifted actor who does much with his part, but Patrick matches him scene for scene in the more difficult and far less showy role.

Director John G. Avildsen does fine with Norman Wexler’s Oscar nominated script, and the film boasts one good scene after the next. The best concerns a dinner party at Joe’s house. The strange circumstances of the friendship are briefly forgotten and the film becomes concerned with the culture clash between haughty Central park West and lowbrow Astoria, Queens. The men take a backseat while the wives (K Callan and Audrey Caire) steal the show. Curtains and Chinese food were never the source of such tension. This sort of thing has been done a million times over the years, but hardly ever so well. A later scene finds Joe and Bill searching the Village for Joe’s missing daughter. They fall in with some hippies for a culture clash of a different sort. In terms of plot development a lot happens here, but it’s worth watching for Avildsen’s ability to believably shepherd a scene through fast, smooth transitions from situation comedy, through sex, and ultimately, to violence — all the while connecting the transitions with believable dialogue.

The film’s climax is extremely silly and hard to swallow. Bit since Joe is so worthwhile I won’t spoil the ending — though the climax is of the sort that comes to the writer in a moment of inspiration and then requires the narrative to be contrived from that point backwards. In this case the machinations required to get us to the payoff just don’t work — the coincidences involved are worthy of Saving Private Ryan. Joe wants to be a morality story, but would have been a much more successful character study. It tries too hard to be too many things to too many people, and falls short in nearly every case. But it sure is a far out trip.