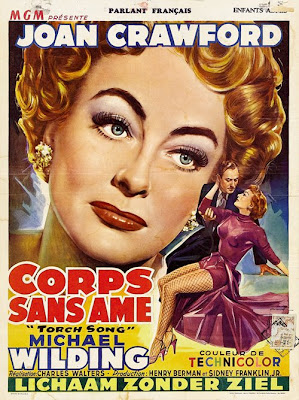 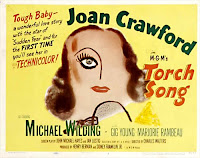 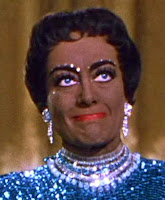 I'll probably return to this film later, but I just finished it and wanted to get my initial thoughts down, before I lose them in memories of pancake makeup (see above). Joan Crawford is a hot-button actress among classic film watchers — everyone has a strong opinion. After all these years and films, I still can't understand those who don't respect her, even if grudgingly. What has always drawn me to Joan and her work is that for a woman who was a perfectionist, and notoriously particular about how she was dressed and photographed, she was willing to give a great deal of herself to her roles, often in ways that were hardly flattering. Torch Song is a great example.

In Torch Song we meet Jenny Stewart, a Broadway star who got her spotlight by giving everything to her audience, always placing their needs first. For Jenny this philosophy becomes the crutch she uses against loneliness, and the club she wields to always get things done her way — which is almost always turns out to the best way. This is melodrama though, so of course Jenny is alone and without love, having domineered or alienated every man in her life. She's so abrasive she lacks female companionship as well. Aside from her maid, every guest at a party she throws is male, and none show the slightest interest in her affections. Only playboy / gigalo Cliff Willard (Gig Young) even gives her the time of day, and that's because she picks up his tabs. Miss Stewart, though Joan plays her sweet in private, is an ice queen.

The film itself is a colossal disaster, and exists firmly within the universe of camp — the colors are garish, the costumes are gaudy, and the dialog is over the top. (For over the top dialog though, it sure has some zing — this is one quotable movie.) And there there's the black-face number, Two-faced Woman. If the thing weren't so humiliating for those involved the film would likely never have seen a DVD release. Once you've seen it you'll understand that no amount of reproach will ever equal the embarrassment that had to be felt by those taking part in the film. At least the makeup would allow everyone involved, except Joan of course, to deny their involvement later.

What I love about this film is the focus on Joan's physical features. The movie takes great pains to showcase Joan's figure in a number of early scenes. Whether dancing, singing, or just sitting, we get to see plenty of the 48 year old's legs, midriff, and bare shoulders. Realizing that these things are happening in the film, one can't help but recognize that Crawford the actress is also vamping for your attention. Just when you are starting to think it all reeks of desperation on the part of the actress, not the character, a 15 foot tall cardboard cutout of Jenny Stewart in a showgirl outfit is delivered backstage, where Stewart pulls up her skirt just to compare the likeness that you realize that Crawford the actress is giving us this, humiliating herself just a little, in order to make Stewart are more human character. What Joan lacked in looks or talent, she made up in sacrifice; and this great quality is on display time and again in her work. It's the thing about Joan that allowed her to take mediocre material like Torch Song, and turn it into something you can't stop watching.

Maybe this was a case of art imitating life after all, but by the mid fifties the great parts for Joan and Bette were in the rear view mirror, and Baby Jane was still a decade away. As Joan herself said “You have to work with what they give you.”
At least she made the best of it.
Torch Song (1953)
Director: Charles Walters
Screenplay: John Michael Hayes and Jan Lustig
Starring: Joan Crawford, Michael Wilding, Gig Young, Marjorie Rambeau, and Harry Morgan.
Released by: MGM
Running time: 90 minutes
Availability: Widely on DVD
Posted by Mark