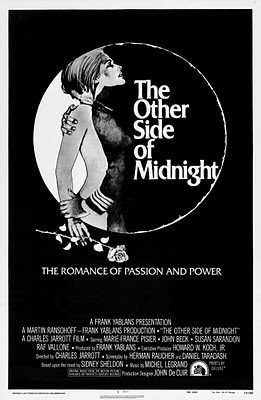 Billed as “The Romance of Passion and Power,” The Other Side of Midnight is one of the most stunningly asinine movies ever made — and widely known to be one of Andy Warhol’s favorites. It was also intended to be one of Fox’s biggest 1977 releases, with high hopes for a major run at that season’s Academy Awards. As a matter of fact, legend holds that Fox executives considered the film to be such a sure thing that studio chief Alan Ladd Jr. drew on the block-booking tradition of the previous era in order to force theaters to accept Midnight as a package deal with one of the studio’s B products — in this case a science fiction picture from a new director named George Lucas. While it is certain that, at least in this instance, theater owners ended up with nothing to grumble about, Midnight failed at the ticket booth and turned out to be a train wreck for everyone involved, except for costumer Irene Sharaff, who managed the film’s lone Oscar nomination — though the nod owes more to Sharaff’s reputation as a five time winner than it does her work in this film. Marie-France Pisier is a wonderful mannequin, but the costumes aren’t that good.

The sprawling three-hour adaptation of Sidney Sheldon’s trashy novel concerns a French girl named Noelle (Pisier) who flees her Marseilles home for Paris in the years just prior to the second world war. Just as it appears she’ll be devoured by the shadier aspects of the city of lights, Noelle is rescued by Larry Douglas (John Beck), an American RAF captain, who seduces her with dinner and the promise of a place to sleep. They couple enjoys a short-lived fairy tale romance, that ends abruptly when Larry is called back to the U.S. in order to train fighter pilots, leaving Noelle — now secretly pregnant (!) — jilted and alone. In a rather shocking bathtub abortion scene, jarringly out of character with the rest of the film, Noelle terminates how own pregnancy and vows to start a new life as a (wait for it!) … film star! Over the course of the next eight years, her career flourishes and eventually she becomes the trophy of a Greek shipping tycoon, who happens to be the world’s richest man. Meanwhile, Larry romances and weds Cathy (Susan Sarandon), a fresh-faced girl Friday to the chief of a Washington DC public relations firm. Unable to hold down a job as a commercial pilot in the years after the war, Larry bounces from job to job and his marriage slowly crumbles — that is until he’s hired to pilot the private plane of a certain Greek shipping tycoon. Old flames flare once again, and in true Postman Always Rings Twice fashion, plans of murder follow — though in this case the target isn’t the Greek, but the shrewish American wife. The film tries hard to take itself seriously, but the ending is so delightfully contrived and over the top — some might say bad, others, hilarious — that it almost makes the whole affair worth watching.

This is an awful film, in all of its late 70s Sheldon glory. It’s poorly executed, especially considering the narrative continuity and film editing. The story moves through time, but does little to help the viewer situate the story in a time or place, using only spoken dialog to do so. It fails to capture the flavor of the war years — barely addressing them at all — making only a half-hearted effort to authentically portray the French capital, expecting viewers to be held rapt by the movie’s melodrama. Even Leonard Maltin, that faithful friend of classic film, rates this as a bomb. Yet it somehow manages to maintain a shaky hold on your attention, though I’m certain that in the case of most male viewers, myself included, it’s the film’s abundant nudity that does the trick. Pisier is certainly beautiful, and Charles Jarrott (the same director responsible for previous big Oscar contenders Anne of the Thousand Days and Mary, Queen of Scots) gets her out of her clothing as often as possible. The requisite shot of a topless Susan Sarandon is to be found as well, but Pisier is clearly the film’s leading actress. The casting of John Beck is one of Midnight’s biggest flaws. Essentially a TV actor, and one of little note, Beck has neither the looks nor the chops to make good here. The film lives or dies on his ability to have believable, even if not smoldering, chemistry with both women, yet Beck just doesn’t deliver. His performance is awkward, clumsy, and shows that the actor was well out of his depth. Frankly, given Beck’s resume, one wonders how he got such a big part in such an important picture.

If this weren’t so unbelieveably long, I’d happily recommend it as a piece of fun camp along the same lines as Meyer’s Valley of the Dolls or even Jacqueline Suzanne’s Once is Not Enough, but in the case of The Other Side of Midnight once is plenty.