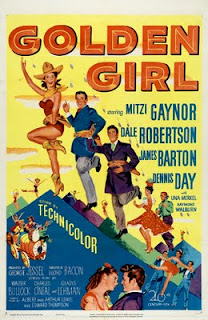 Mitzi Gaynor is a recent re-discovery for me, having never been a fan of South Pacific, which I saw once eons ago and promptly moved on from. I just watched a much younger Mitzi in 1951’s Golden Girl, and found something in her first featured performance quite endearing. The forgotten film casts Mitzi as Gold Rush honey Lotta Crabtree, making her name as a performer in the mining camps throughout California during the Civil War period. There’s not much to speak for Golden Girl beyond Gaynor — the songs aren’t memorable and the romance with a dashing southern spy / officer (TV Western star Dale Robertson) who robs Union payrolls feels dated and a little uncomfortable. The climax finds Gaynor bleating a tearful rendition of Dixie in a high-falootin’ San Francisco auditorium just as news of the surrender at Appomattox has made its way west. Golden Girl has never been released on DVD (or VHS?), and the print showing on Turner Classic Movies is so poor as to not bode well for its future. On a side note, the poster for Golden Girl is simply one of the most awful I’ve ever seen.

And then there’s Les Girls. If it were not for Mitzi, whose part is too small for my tastes, I would have liked it a great deal less. If you are a fan of MGM musicals however, Les Girls is available everywhere and is a film that you simply have to see, even if I say that in a somewhat weary, obligatory tone of voice (being a completist has its downside). The production values are as sumptuous and as artistic as anything else Metro did during the period — particularly in Mitzi’s big number towards the end of the film. (The film was an Oscar winner for its costumes.) The narrative gets a little tedious though: the story is centers around a London courtroom libel suit that finds two of Gene Kelly’s former troupers — Les Girls — at each others throats over a tell-all book one has just written. The same set of events are related three times, each time through the eyes of a different character, and before long we see way in which all the strings are going to tie neatly together. 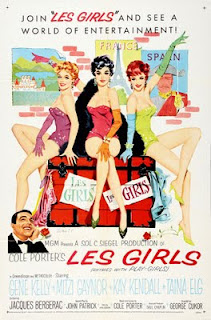 In addition to Gaynor and Gene Kelly, the film casts lanky Brit Kay Kendall as the author of the tell-all, and sexy Finn Taina Elg as the libeled lady. Elg was certainly a stunner, but she never really caught on with American audiences, while Kendall had all the talent in the world yet never had a fighting chance to use it — she would succumb to leukemia two short years later, in 1959. While each of the girls brings something worthwhile to the film, they never quite gel on screen together in the way they do with their male costars, and the movie suffers a little for it.

The biggest drawback for me is that this is yet another late-cycle musical that fails to properly integrate the musical numbers into the story. As so often became the case as the fifties grew tired, the musical interludes show up like television commercial breaks — here in the form of the Les Girls nightclub acts, each one a little more artsy-fartsy and self indulgent than the last. (And don’t get me wrong either, I think An American in Paris is great stuff!) This is not a bad film by any means, but it is rather soul-less and clearly shows that the musical was running on fumes in 1957, and desperately needed the shot in the arm that West Side Story was stirring up on Broadway at the time, and would in a few years give the motion picture musical.

At almost 80, Mitzi is still out there somewhere, though her motion picture career was too damn short: eighteen credits, and no big screen work after 1963. She did a number of TV specials in the seventies, but they are nowhere to be found. It’s too bad, Gaynor had a look, style, and screen presence that doesn’t translate to photography — you’ve gotta see her in films. 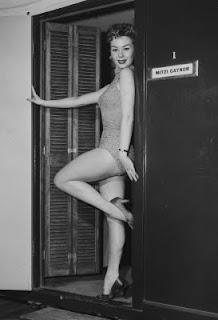 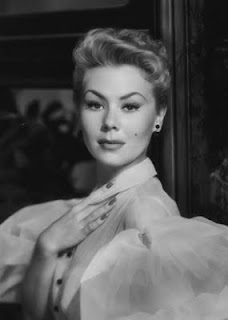 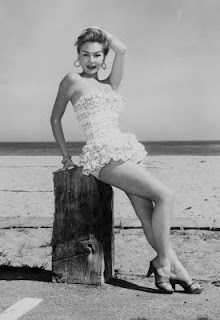 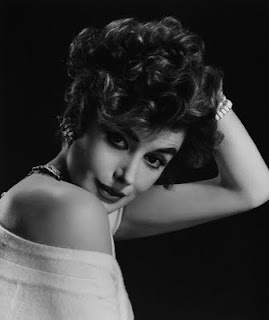