The most avid classic film enthusiasts all have something in common: they can’t tell you how many times they’ve gnashed their teeth upon visiting IMDb and reading this dreaded phrase concerning a sought-after film:

One of over 700 Paramount Productions, filmed between 1929 and 1949, which were sold to MCA/Universal in 1958 for television distribution, and have been owned and controlled by Universal ever since.

Such is the case with the 1935 film Private Worlds, starring Claudette Colbert, Charles Boyer, Joel McCrea, and Joan Bennett. With such a cast it is easy to understand why Private Worlds would be in demand — even more so for a devotee of the Academy Awards like me: Claudette Colbert earned a Best Actress nomination for her work in the film. Many of these 700 films were shown regularly by American Movie Classics back in its heyday, when host Bob Dorian offered the Pepsi to Robert Osbourne’s Coca-Cola across the dial at Turner Classic Movies.

And although AMC, thanks to Mad Men and other original television programs, has redeemed itself in the eyes of many, it still stings that their rather broad idea of an “American Movie Classic” starts and stops with pictures like Steven Seagal’s Marked for Death. 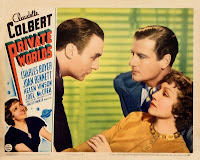 Those of you with a long memory may recall that in the wake of their format change, AMC attempted to spin out a new network, AMC’s Hollywood Classics, that would have maintained their original format, but the channel never materialized. Maybe such a venture is once again possible? I don’t know the ins and outs of cable television, but it’s surprising to me given the phenomenal success of TCM, that there isn’t room for AMC to somehow return to its roots and rebroadcast their vintage film library. Certainly with the ever-growing number of super-specialized networks doing business today there has to be room for another classic film outlet. If nothing else, why not cut a streaming deal with Netflix? Until then, anyone in search of such a film has to do just that: search. Doing so led me to purchase a bootleg copy of Private Worlds from the web, as I have often done in the past. The quality is universally poor, and the running time are almost always a minute or two shy of what’s listed on IMDb — but the films are watchable and, at least, available.

Without actually seeing the film it would be easy to dismiss Private Worlds as merely a romantic melodrama set in a mental hospital (the poster certainly suggests as much), but there is much more happening in the movie to make it worth seeking out. Here’s the story in a nutshell: Claudette Colbert plays Dr. Jane Everest, a psychiatrist in charge of the male ward at The Brentwood clinic, a progressive mental hospital. Her partner is Dr. Alex MacGregor (Joel McCrea), with whom she has partnered for many years. Despite their professional relationship the pair are not involved romantically — MacGregor is already married to Sally (Joan Bennett), an innocent and trusting girl who adores Jane and trusts Alex — until he gives here reason not to, while Jane pines for a love lost during the first world war. Things begin to go awry when a new hospital superintendant is appointed: Dr. Monet (Charles Boyer) who arrives with his sister Claire (Helen Vinson) in tow and begins to shake things up at the hospital. Monet believes there is no place for a woman in the upper echelons of the medical profession, and banishes Jane to the outpatient clinic. Claire is attracted to Alex, and easily pulls him in her direction, while Sally gradually becomes unglued. The consequences of Alex’s transgressions with Claire are the source of much of the film’s dramatic tension, and the final few reels are concerned with all of these entanglements sorting themselves out, with Colbert’s Jane the driving force behind everything.

Based on the novel by Phyllis Bottome (who more famously wrote the book that became the film The Mortal Storm), the film boasts the sort of meticulously interwoven plotting often found in book-to-movie-translations. The script itself is well constructed and progressive. Long before there are any notions of romance we are taken on a semi-documentary-style guided tour of the mental facility and shown firsthand exactly how well Colbert’s character knows her business. Colbert’s Jane Everest is a surprisingly modern breath of fresh air: She’s intelligent, witty, professional, and most importantly, respected as a superior physician by all of her male counterparts — even Boyer’s Monet, in his own time. She stands out against the stereotypically feminine and clichéd constructions of the movie’s other three women: Sally, the clinging and naïve wife; Claire, the manipulative and selfish home wrecker; and the dour, old-fashioned ward matron (Esther Dale), who rails against Jane’s presence in the hospital as anything other than a nurse. The film works hard to break various commonly held beliefs about mental institutions and the mentally ill, with entire scenes (and one character) dedicated to debunking myths. In a key moment that really typifies the movie’s point of view, McCrea’s character says, “I find very little difference between sanity and insanity.” 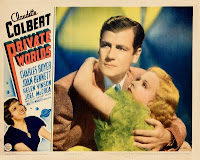 Gregory La Cava, who did most of his directorial work during the silent era (though he helmed such well remembered movies as My Man Godfrey and Stage Door, among others), does a fine job with this material. One scene in particular stands out and demonstrates how tight the narrative of the film is: early on we are introduced to two of Brentwood’s patients, a muscular man named Jerry who likes to see everything that is happening on the ward, and an dying, bed-ridden old man who murmurs constantly to himself in an unknown language. Late one night, shortly after joining the staff, Dr. Monet is called to the ward, where he looks in on the old man. He tells the nurse that the man is speaking Arabic and merely wants someone to pray for him. Dr. Monet grants the request, but not before placing screens around the gurney in an effort to spare the dying man’s dignity. This infuriates Jerry, who springs from his bed and attacks Monet, seconds after the old man finally succumbs. Jane, just entering the scene, shouts a warning just as Jerry attacks the doctor. The two men struggle while the other patients shout encouragement. La Cava’s camera pans in both directions and zooms in and out on the leering faces of the disturbed patients, as the soundtrack becomes a cacophony of screams and cackles. Combined with the near pitch-black setting the scene takes on an expressionistic feel very much out of character with other domestic films of the time. It’s a visually striking scene that reinforces the notion that Colbert’s Everest understands and manages the patients on the ward to a greater extent than her male counterparts, yet also softens the viewer’s impression of Boyer’s Monet. It culminates a few subtle instances of earlier foreshadowing and punctuates the middle of the film.

Admittedly, as much as I liked Private Worlds, it has its share of flaws. In general, it sells out too much to melodrama in its second half, but given the period and the mood of depression-era audiences it is difficult to hold it against the film. We are asked to accept American actress Helen Vinson as Charles Boyer’s sister, yet are given no explanations as to their vastly different accents. Colbert’s Jane Everest is a little too perfect as well. Self-sacrificing, medically infallible, even angelic at times (if it helps, it’s very easy to imagine Loretta Young in this part), it would have been nice if Colbert had been allowed to be a little more human here — again understandable given the movie’s goal of showing that a female doctor could hold her own, even thrive, in a male-dominated profession. Nonetheless this is a sparkling mid-thirties film that deserves to be seen again.