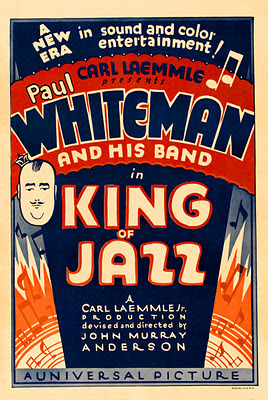 Make way for Universal and little Carl’s 1930 musical revue, King of Jazz. The title refers to the jovial bandleader Paul Whiteman, though the film offers nothing in the way of the biography you might expect. Instead, it’s essentially just a filmed vaudeville show — though arguably (with an gigantic two million dollar budget) the best one you’ve ever seen. The show actually opens with a cartoon — by Walter Lantz of Woody Woodpecker fame no less, and the first such animation to be filmed in Technicolor. King of Jazz is historically significant for that reason alone, but it also features a surprisingly good sequence of numbers featuring the stars of the day, including a youthful Bing Crosby and the “Rhythm Boys.” The young crooner struts his stuff in four or five separate numbers, with the bouncy Happy Feet the best of the bunch. Personally, my favorite number is a clichéd dance where Raggedy Ann and Andy dolls spring to life and put on an acrobatic ballet, featuring a female dancer who is almost more contortionist than anything else. Nonetheless, there’s something for everyone here — even today’s young people: an elastic tap dancer who does the earliest moonwalk I’ve ever seen, and a row of chorus girls who put on a step show that might merit a double take from the students at Howard.

Whiteman, who for decades was a star of the first order, doesn’t overexert himself. He pops in and out, most often for the sake of comic relief, though he gets the most out of the movie’s second biggest number: an homage to George Gershwin’s Rhapsody in Blue, resplendent in the film’s finest production values (and that’s saying something). King of Jazz is a visual delight, with a dog and pony show of cutting edge art direction and set design. It’s interesting that such a film would come from Carl Laemmle and Universal rather than MGM, but the “major minor” was flush from their success with Best Picture Winner All Quiet on the Western Front and Laemmle never seemed to tire of attempting make-or-break forays into A level production. There are colossal Berkeley-esque set pieces and props, along with numerous chorus lines, lavish costumes, and offbeat camera angles — you’ll even find ample use of stop-motion animation. Designer Herman Rosse won the third annual Academy Award for Art Direction for his astonishing work on the film.

The meat of the thing is really split between the Gershwin number and the finale, which is another homage of sorts, this time to all of the immigrant musical styles that have come together to for the “American Musical Melting Pot” that everyone knows as “Jazz.” Unfortunately, the contribution of black Americans is sadly left out of the stew for the sake of safer fare such as Irish, Spanish, and Russian influences. This omission is King of Jazz’s biggest disappointment. In a film that happily avoids the racial stereotyping so often found in similar movies from the time — no minstrel numbers or blackface — it’s unfortunate that the film’s only African influence is a lone rhythmic dance number that open the Gershwin sequence. Nonetheless, what’s left over is entertaining, funny, occasionally risqué, and in glorious 1930 Technicolor. 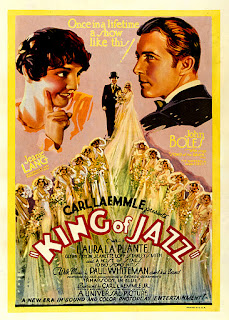