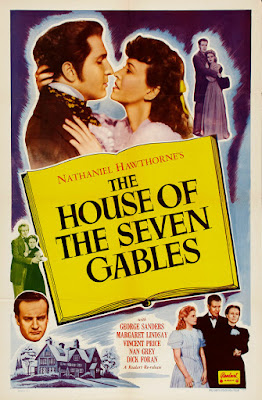 It’s Vincent Price versus George Sanders in Universal’s seldom-seen 1940 adaptation of Nathaniel Hawthorne’s early American gothic, The House of the Seven Gables. The two actors play bickering brothers who grapple over the fate of the family’s ancestral home. The titular house, located in that literary haven of ill-fortune: Salem, Massachusetts, comes with plenty of baggage though, including creditors and a centuries-old curse — not to mention a curmudgeonly father who isn’t quite ready for the grave.

Hang on a second, “what’s a gable?” you say? A gable is the triangular end of a building. Look below for a small illustration of a home with three gables. Got it? Back to the film.

Price’s Clifford Pyncheon is the good guy here, while Sanders barely stretches to bring snide older brother Jaffrey to life. Margaret Lindsay, who you’ll likely remember as Amy from Bette Davis’s Jezebel, is along for the ride in a featured role as cousin Hepzibah, Clifford’s devoted fiancé. The story sets up like this, I promise not to give anything away: The lion’s share of the action stems from a boisterous confrontation between Clifford and his father regarding the fate of the house. At the peak of his ire, the old fellow suffers from some sort of bizarre throat contraction and topples to the floor dead. For good measure bangs his head on the corner of a desk on the way down, drawing a bead of fresh blood and causing an exotic paperweight to fall and settle conveniently beside his fresh corpse. It seems that the whole town is listening to the fray out on the street, and Jaffrey rushes into the room just in time to accuse the innocent Clifford of murder by bludgeoning. In Hawthorne’s world, where women are either gossips or saints and men saints or rascals, it doesn’t take long to pack Clifford off to the state prison for a life sentence. Jaffrey triumph is short-lived though, he fails to inherit the coveted house after all — the elder Pyncheon has surprisingly bequeathed it to Hepzibah, who tosses Jaffrey onto the street and in short order becomes the town spinster, patiently waiting two decades on a pardon for Clifford. In the meantime, Jaffrey becomes a powerful judge — also engaged in some very shady ‘shipping’ deals — while Clifford languishes in his cell, determinedly going gray and studying his Alexandre Dumas — revenge is in the works…along with a little karma.

Even at 89 minutes this is a short film, and if my tone seems a bit glib it’s because Universal cuts enough corners with the source material that it becomes difficult to take The House of the Seven Gables entirely seriously. Certainly a film can score at that rather standard running time, but this one spans more than twenty years in narrative time and a mere five or ten additional minutes of film would have gone a long way towards pushing this into classic adaptation territory. Though coming from Universal in 1940, when it was all about Deanna and Dracula, corner-cutting should be expected. Make no mistake though, this is entertaining movie in spite of its deficiencies — with these two stars, how could it not be? Price wins the battle of screen time, with Sanders, the superior actor, doing more with his moments. When Sanders committed suicide in 1972, he famously did so by telling us all that he was bored with life. It is to his credit though that as an actor he was always able to bring some verve to his performances, even though the studios constantly cast him as an urbane heel. Given his incredible gifts and perpetual typecasting, it isn’t surprising that after a lifetime of such parts Sanders would have grown weary.

If this suffers at all it’s because of Lindsay, who actually has the largest role but nonetheless gets crowded out of the screen by two charismatic male leads. Grinning Dick Foran, Nan Grey, and Cecil Kellaway round out the cast, but all three of them could have given some way in order to strengthen the central narrative. It isn’t that the secondary characters aren’t important, it’s just that in such a brief film their roles seem rather puffed-up — often at the expense of some inexplicable narrative moments that would have benefitted from a tad more fleshing-out. In the end though this is a modest thriller — competently produced, satisfyingly suspenseful, and very-well performed. Oh, and with an Oscar nominated original score.

The House of the Seven Gables (1940)
Directed by Joe May
Starring Vincent Price and George Sanders
Released by Universal
Running time: 89 minutes
Grade: B