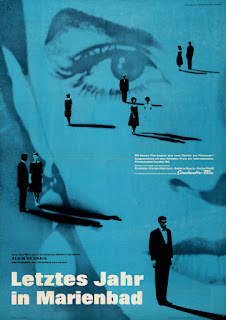 Alain Resnais’s tedious, beautiful, and silly Last Year at Marienbad is almost more interesting to read about than it is to view, the reactions are so wildly varied. Since its 1961 release it has become one of the more polarizing films ever made, on zillions of best-of-all-time lists and as many worst-of-all-time lists, while almost everyone considers it indecipherable. This isn’t a movie for those interested in Hollywood-style entertainment, so the majority would just look baffled. 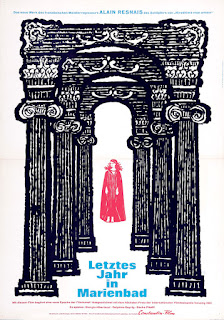 Surreal? Not really. As an art professor I can tell you that the word surreal gets bandied about a little too often, particularly by film people.  I’ll also add, with some oomph behind it, that when confronted with indecipherable our typical response is either “bullshit,” or “chickenshit.” (By the way, “art” is a praise word; you don’t call yourself an artist or label your “stuff” art, let others say such things about you or your work. Of course don’t mind me, you can do so if you like.)  Dreamlike maybe? Okay, whatever. If nothing else the film offers one more filmic take on the dream state, however elementary, and not meant to be deciphered, not meant to be understood, and especially not meant to be responded to. It seems to have vomited itself up, as if a Psych 101 study group made a list of all of the different things that happen in dreams, and then tied the experiences together with film and fishing line and called it a narrative: that of a man attempting to convince a woman that they shared an affair in another time and another place — perhaps last year, at Marienbad. She resists, and the bulk of the running time is ostensibly concerned with his fleshing out of this elaborate fantasy, though it’s really just an excuse to stray into pure formalism and call it art, with the hope that the pastiche of imagery will be enough to hold one’s attention for the duration. Look for something authentic or question the thing, or express any misgivings at all and you run the risk of appearing oafish or uncool. (and it’s amazing to consider this film has held such power over audiences, and repelled criticism for more than fifty years now. I won’t even begin to attempt to fathom its Oscar nomination in the screenplay category.) Yet it remains that this is movie, or rather film (movies tell stories) is too vain, too obviously collaborative, and too damn superficial — and it appeals to those qualities in its viewers. Have you heard it before? Too much style, not enough substance. This ain’t artsy folks, it’s banal. Why do you think it’s so popular? 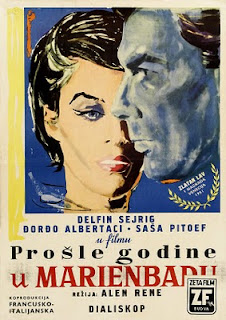 If you want to read the film as an examination of dreams, or even the fleeting nature of memory, go ahead — you get 93 minutes to wallow in it. Marienbad is a visually striking film that despite all of its formal decadence refuses to function as a drama. It cannot pass muster merely through the power of the still image — the difference between the still photograph and the film is one of duration, and so the presentation of a succession of striking vignettes, either wholly disconnected or connected with a wink and a smile, does not add up to a worthy cinematic experience, at least not for me. If so, it’s a lazy one. As such, film is inherently inferior to the traditional arts. If viewers are supposed to be enthralled by the cinematic experience and the means by which it unfolds then let’s find better subject matter. Call me bourgeois, but I care little for Resnais’s beautiful people and their vapid dreams. After all, if these characters are people I’d hold up for scorn in waking life, then how in the world can I love a film that explores their dreams? On the merits of the formal qualities alone? Maybe — the technical filmmaking here is masterful, but that just isn’t enough for me. By the end of the first hour I was squirming at the redundancy of the dialogue, the repetition of imagery, and even the grotesque artificiality (how often can she pose?) of Delphine Seyrig. Tedious.

In the end, Marienbad has as much power as the advertisements for Chanel No. 5 it inspired.