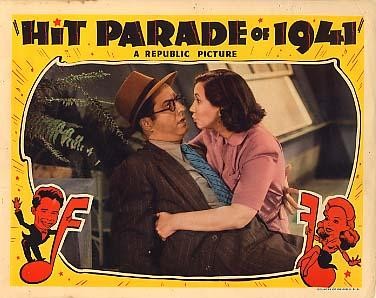 I’ve seen countless Hollywood musicals, and any more it’s rare that I discover a film that I enjoy, or have even the slightest desire to write about. Such is the case, however, with the elusive Hit Parade of 1941. There have been numerous films to appear under the Hit Parade banner, and they have little in common with each other. The most well-known is the 1943 entry starring Susan Hayward — it’s available via Netflix streaming and is well worth a look — and just like the Hit Parade of 1941 it’s a double Academy Award nominee, in both the Song and Score categories.

Of course all of these films — just like the Broadway Melody series — are little more than cinematic fluff, but that rather goes without saying. Hit Parade of 1941 is nevertheless a charming and entertaining film that, excuse the horrible pun, hits all the right notes. It features radio star Kenny Baker, who I first encountered in the odd 1937 film Mr. Dodd Takes the Air. If you know Baker at all, it’s likely from his supporting role in the Garland’s The Harvey Girls. He had boyish good looks and a beautifully clear voice. The studios tended to use him in unsophisticated, innocent, aw-shucks parts, and Hit Parade is no different.

Baker plays David Farraday, who helps his zany uncle (Hugh Herbert) run a Connecticut trading post (or is it a swap shop? or maybe a flea market?) that advertises on WPX, a Brooklyn radio station. The station is floundering, so when the elder Farraday threatens to pull his sponsorship the station manager makes the trip to the suburbs hoping to convince him to hang on a little while longer. Yet somehow, Farraday pulls an impressive swap of his own, and trades the swap meet for the radio station! Both Farraday men easily transition to life as radio station owners, and quickly set their sights on the newly expanding world of television. (A 1940 film that embraces television? How Hollywood’s attitudes would change in the coming decade!) Longtime advertiser Mrs. Potter (character actress par excellence Mary Boland) is happy to sign on in support of WPX’s new television hour, but only if it features her niece Annabelle (Ann Miller). The problem is that, in spite of thousands of dollars in singing lessons, Annabelle can’t carry a tune. David has an idea: he asks singer and wannabe girlfriend Pat (Frances Langford) to dub Annabelle from a nearby sound booth. It works for a while, with predictable movie musical results. But fortunately for us all, Annabelle doesn’t want to sing anyway — we know what she wants to do…

Hit Parade of 1941 has what you are looking for: the comedy bits are actually funny, and the musical numbers are memorable. Baker and Langford make a good couple: solid chemistry and superb voices. Langford wasn’t exactly a minor star, but given her looks and talent it is somewhat surprising she wasn’t bigger. Although she only made two dozen or so films, mostly light musicals similar to this one, the “Sweetheart of the Fighting Fronts” was a staple of Bob Hope’s USO tours, an on the radio. In addition to Baker and Langford, Hit Parade gives us two more couples: Patsy Kelly and Phil Silvers, and Mary Boland pairs with Hugh Herbert. Top to bottom, it all works. One of the most entertaining musical acts in the film is, oddly enough, “Borrah Minevitch and His Harmonica Rascals.” I know, I know, but trust me. If you can’t manage to locate this film, you can catch them in two pictures that are a little easier to find: 1942’s Always in My Heart with Kay Francis and Walter Huston, or in the 1936 Sonja Henie movie, One in a Million. These guys are worth it, fulfilling the same role as the Nicholas Brothers in numerous Fox pictures; they don’t contribute much to the story, but they punctuate it with something rather special.

The stars themselves do quite well too, but one musical sequence is truly spectacular. It finds Langford behind the microphone at a Manhattan nightclub, belting out “Swing Low, Sweet Rhythm,” while Ann Miller takes to the dance floor in an skimpy black get-up cadged from the cigarette girl. It’s a show-stopping treat of a number, offering the chance to see two beautiful young women doing what they do best. Langford is in great form, a full swing orchestra behind her — while Miller spins, sparkles, and taps her way across the floor — knowing no one in the world save Eleanor Powell could match her. It’s one of those moments that remind us why we like these films; it brims over with that special magic of the best forties musicals. You’ll stop what you are doing and pay close attention, hoping it will go on forever. But everything about these films, just like the months and years of that all-important decade — and the flickering images themselves — is fleeting.